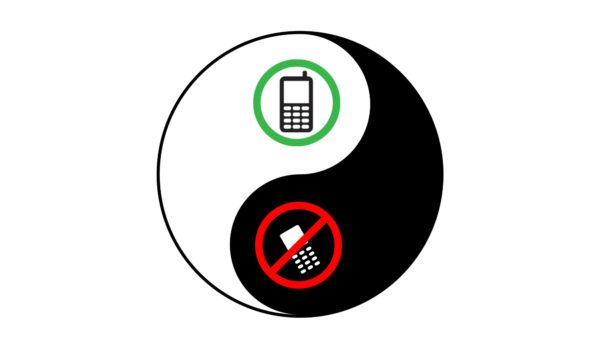 A few weeks ago, I taught a late-evening hot power yoga class at a popular fitness centre. The room was dark and sweaty, the lights dimmed low and the sun already set. It was a busy class, more than 40 students filling the room from wall to wall. We were about halfway into the 75-minute class. I had just taken them through a challenging flow and I offered the students a natural pause to drink water. While I waited, I was surprised to see the pale light of devices powering on around the room. I counted one, two, then four, then eight, maybe 10 cell phones. I watched faces illuminated by the apparently irresistible glow of a screen.

Cell phones in yoga class aren’t a new thing, but since I began teaching in 2010, their presence has increased and the energy around them has shifted. I’m quite accustomed to having students approach me before class to say they’re an on-call doctor or midwife and, therefore, may need to leave class to take an urgent call. I’ve also seen parents keep their phones close by in case the baby-sitter calls. In these situations, the phone is there by necessity for urgent incoming calls and texts.

But in the past two years, I’ve noticed a new phenomenon. Many students now arrive to class with their phones in hand, and spend the minutes leading up to class engaged with their screens. As class begins, they place their phones on the floor beside their mats, sometimes turned over, but just as often face up so they can be alerted to incoming messages. While some styles of yoga afford few opportunities to check in with phones (except, apparently, during water breaks) other styles seem to invite frequent phone checking. I’ve seen students in my yin and Yoga Tune-Up classes idly pick up their phones while holding pigeon pose or rolling out their gluteus maximus. The energy around this is clearly different from that of the on-call professionals and parents.

I’ve been watching this for the past two years without saying much about it. Honestly, my inner school teacher wants to walk around with a basket and say “(throat clear) In it goes, you can collect it after class”. But my inner yoga teacher feels like this issue runs deeper than just bringing contraband to school. There’s an undeniable energy around cell phones, and it’s only getting stronger.

Outside of yoga class, I see it everywhere. It’s so commonplace it hardly needs describing here. The cell phone is the ubiquitous appendage, the extension of self. It’s the external mind, storing knowledge, memories, images, maps, birthdays, correspondence, appointments, grocery lists, and playlists. Gone are the days when facts and memories needed to be conjured up by neurons and synapses. The screen of the mind has been replaced with an actual screen.

What other yoga teachers are saying

I’ve asked a few colleagues about how they approach cell phones in their yoga classes. Some make announcements at the beginning of class about policies around phone usage. Others speak with students on an individual basis. Others haven’t found it to be an issue in their classes and are appalled at the thought. Most of us have the impulse to denounce it altogether. “It’s not mindful!”, said one yoga teacher, “If you can’t be away from your phone for an hour, don’t come to yoga class.”

But the adults who come to my drop-in yoga classes pay to be there, and it’s their time. If they were using their phones for voice conversations, it would be easy to argue that they’re being disruptive. However, quietly texting and checking feeds isn’t particularly disruptive, and certainly no more so than arriving late for class or snoring in savasana. So why am I so deeply troubled by it?

As a meditator and long-time yogi, I’m fully aware of how the discursivity of my mind often keeps me from engaging with the present moment. The internal chatter of “pick up some greens for dinner, her comment felt judgy, should I change jobs?” is relentless and often painful. The human desire to avoid pain and get comfortable is at the root of every addiction. We over-eat, shop, drink, and get high to numb the pain of our situations. And more recently, we scroll and scroll through our social media feeds, looking for something to validate our lives, even as our lives are happening around us.

In this way, discursivity is just one more thing we’ve outsourced to our cell phones. When the vulnerability of our situation becomes too much, a never-ending stream of status updates is there to provide distraction and relief. Knowing this, compassion seems like the only thoughtful response to students checking phones in class. As a yoga teacher, I want to encourage my students to work with vulnerability, discursivity, and addiction, so I hesitate to take a hard stand on cell phones in yoga class. Not because I condone them, but because I see them as symptomatic of a much larger issue: a widespread and almost pathological aversion to discomfort of any kind.

How do we learn to sit with discomfort? We learn by doing it. We notice the itch, whether it be to scratch our nose or check our phone and, as a patient and loving master says to her dog, we say to our own reactivity: STAY. We practice staying, breath by breath, moment by moment. We stay with the discomfort, the burning, the agony of non-reactivity. In this way, we cultivate resilience; we cultivate our ability to hold our seat when things get tough.

This kind of practice takes courage. It’s so contrary to how most of us live our lives! But where better to nurture the seeds of resilience and non-reactivity than on our yoga mats? Once we’ve practiced sitting with benign discomfort on our mats, we can take the qualities of non-reactivity and resilience with us into our daily lives. We can hold our seat when things really matter: when we’re stuck in traffic or experiencing conflict with our kids, our partner, our boss.

So, while I could take a harder stand against cell phones in yoga class, that would only be addressing a small part of the larger issue. It could also backfire, alienating students who need my encouragement, not my ultimatums. There will always be outlets for distraction in yoga class, whether it be inner discursivity or outer restlessness. As a yoga teacher, I want to go beyond treating the symptoms; I want to shine a light on the source of our restlessness. So, bring your cell phone to my yoga class, if you must, and together we’ll train in leaving it be.