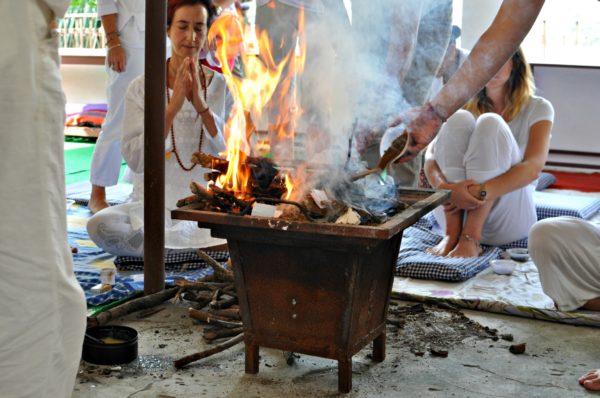 When I arrived home from India, it took me four days to unpack my suitcase, a week to finish the anti-malaria meds, and 10 days to shake the jet lag. But two months later, I’m still integrating what I learned and practiced there.

I mentioned in an earlier post that I left for India weighed down with questions. One of the biggest, and one I’m still sitting with, is about gurus.

It’s written in the Bhagavad Gita (an important yogic text), that one cannot attain enlightenment without the help of a guru. Even with the most detailed map, every yoga student needs a way-finder who has gone before.

While in India I had the chance to ask a couple of swamis (master teachers) about the importance of a guru. In particular, I asked whether we should aim to cultivate a relationship with a single, primary guru, or if we could have many gurus over the course of our lives. The swamis confirmed what I suspected, that, yes, having a single guru is important. Studying with other, secondary teachers is fine, but we should devote ourselves to a single guru for our main instructions. If you subscribe to the “one god, many paths” view, as I do, the idea is that you don’t want to be jumping from path to path. Pick a path, and follow it.

But where to find such a guru? Gone are the days of finding my guru sitting lotus-style in a cave, looking up as I approach to say “I’ve been expecting you”. Of course, in this age of social media and brand marketing, there’s no dearth of people who would like to be my guru, but I’m doubtful of their motives and qualifications. I’m with Lao Tzu when he says:

Those who know don’t talk.
Those who talk don’t know.

I know what kind of teachers I gravitate to. I look for women, specifically women who teach and write in English, because I’m suspicious of translations and I want the toughest lessons to come with a good measure of humour, and humour rarely translates. I want her to not have all the answers, and to sometimes say “I don’t know” and “I’m still learning”. I want her to have life experiences that I can relate to, like failing, and being hurt, and hurting others.

I look for teachers who let me see them up close. I don’t mean physically close, although this can be lovely; I mean teachers who don’t stand at a distance from their students. The opposite of this:

In Tibet there is a saying that your guru should live at least three valleys away. These valleys are separated by huge mountains, so to see your teacher means many days of hard travel. The point is that only at this distance can you be inspired by the perfection of the guru.

-Jack Kornfield, After the Ecstasy, the Laundry

It’s never the perfections of my teachers that inspire me, it’s always the imperfections and their willingness to hold these up to the light with self-compassion and humour.

I’ve been lucky to find two teachers who fit this bill. Pema Chödrön is an American Tibetan Buddhist. Before becoming an ordained nun, she married, had two children, divorced, married again, and divorced again. It was the overwhelming pain of her personal life that drew her to meditation, and ultimately to monastic life. Her teachings are drawn as much from her own personal experiences as they are from Buddhism, and she’s so funny. I’ve often said that I’m not interested in becoming Buddhist, but I would gladly be ordained into the order of Pema Chödrön.

Alongside Pema Chödrön is another teacher whom I feel blessed to call mentor and way-finder. I first met Kat Mills in 2008 when I attended her drop-in yoga classes. A year later she was part of the faculty of my first yoga teacher training. I went on to study with her many times, then to collaborate with her on a teacher training of our own, then most recently to travel with her to Bhutan and India. Like Pema Chödrön, Kat’s willingness to laugh at herself, while still connecting the messiness of her lived experiences to the spiritual path, inspires me every day. I feel immense gratitude that the valleys and mountains that separate me from Kat can be easily crossed by highway 50.

Now I’ve come to what feels like the end of this composition, and I still haven’t arrived at an answer to my questions. I have two beloved teachers whom I look to for guidance, but I don’t consider either of them a guru in the traditional sense. Perhaps I’m not a yogi in the traditional sense, or perhaps my approach is one of the paths in the “one god, many paths” view. Or perhaps my guru is waiting for me in a cave somewhere and I’ll find her when I’m ready.

As the best teachers say,