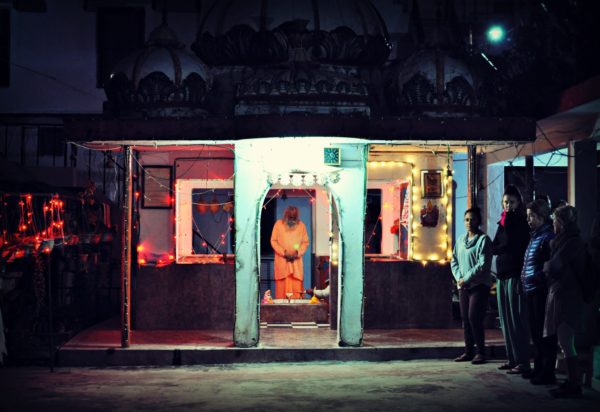 When I left for India last month, I was light in luggage (carry-on only!), but heavy in questions. Not a great number of questions, but a couple of biggies. The questions weren’t new ones, I’ve been asking them for years. Maybe you and I have already had this conversation, maybe these questions are yours also.

The questions have, at their core, the great human need for belonging. Don’t we all want to feel like we belong? I have a deep sense of belonging within my family, both the one I was born into and the one I created with my partner. But when it comes to the yoga community, I used to wonder where I fit.

Like any tradition with a long and rich history, yoga has its own genealogies, or lineages, as they’re called. You can trace certain yoga teachings back through time, as received by students from their teachers, who received them from their teachers, and so on. When yoga made its big leap over the ocean to North America in the last century, a number of lineages landed safely, and are still being passed down today. From the great Indian yoga master Krishnamacharya, for example, came several lineages that are widely practiced in North America: Ashtanga yoga (as taught by K. Pattabhi Jois), Iyengar yoga (as taught by BNS Iyengar), and Viniyoga (as taught by TKV Desikachar), to name a few.

However, it’s just as possible in North America to be a student of yoga and exist outside of any particular lineage. At the multi-style yoga studio where I took my first yoga teacher training, we were taught about lineages without being located in one. My teachers had varied backgrounds. One teacher was trained in the Kripalu tradition and spoke fondly of her “grandpa guru” (i.e. her guru’s guru), but it was clear that he wasn’t our grandpa guru. We were never initiated into that particular lineage. In some traditions, such as Sivananda (as taught by Vishnudevananda) and Kundalini (as taught by Yogi Bhajan), new teachers are given a spiritual name to announce their place in their yoga community. We were offered no such rite of passage.

Truthfully, I’m ambivalent about spiritual names. They seem a bit silly. But I kind of want one. I’ve also found myself wanting a guru whose picture I could put in a frame and place on my altar, preferably a dead guru who hasn’t been involved in any sex scandals. I thought this would give me a kind of comfort when I stand at the front of a yoga class. I thought I would feel more confident if I knew that my teachings were part of an unbroken chain of time-tested wisdom, and I could point to that chain and say “See that link at the end? That’s me.”

So, I went to India carrying these questions about lineage and gurus and wondering about my place in it all. In India, I attended satsangs (gatherings) with a number of different swamis (master teachers). I asked my questions, and, just as important, I had lots of time to sift through the answers I received during periods of meditation, contemplation, and the practice of mauna (holding silence).

What it comes down to, I see now, is a false fiction: I believed that having a clear lineage would provide ground in a groundless world. Every time I’ve met with ambiguity in my practice I’ve believed it to be the result of having no clear path. I’ve longed to be insulated against failure, stepping in the footprints of the ones who broke the trail for me.

What I learned in India is that lineages, as I know them, come and go. To put it into western terms, they’re like brand names. If we have a good experience at an Iyengar class, we start to look for Iyengar classes. But Iyengar is just another word for yoga, the way Levi’s is just another word for jeans. Long before there was Iyengar, there was yoga. That’s my lineage.

At the same time, ambiguity and groundlessness are here to stay. A seat at the table doesn’t make me immune to doubt. But recognizing that, from within a community of yogis who are all at different stages of making friends with uncertainty, is, in itself, a comfort.