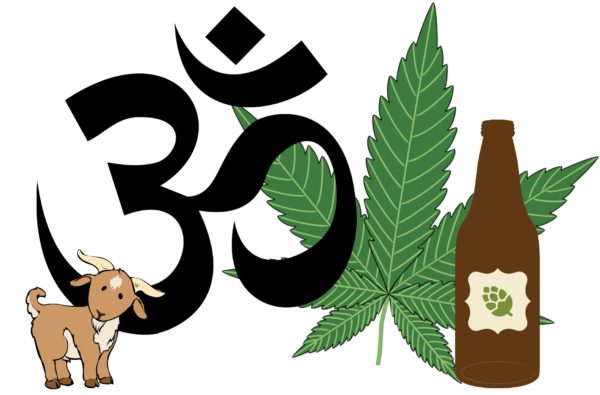 “It’s begun!” I groaned to my husband recently as I sat scrolling my Facebook feeds. “What?” he asked, walking over to me. “Pot and yoga classes. It’s not even legal yet, but there it is.”

I knew it would happen, though I naively expected it to wait until after legalization. Offering marijuana and yoga together is a natural progression from the increasingly popular phenomena of beer yoga, wine yoga, and other boozy yoga events.

I’m not going to argue that these practices aren’t yoga.

Whenever I catch myself moving toward that kind of arrogance, I’m reminded of a terrific quote from Benjamin Lorr’s book on Bikram yoga, Hellbent, where he writes:

Yoga is a vast history: it can be contemplation; it can also be a postejaculatory man attempting to suck his semen back up his penis like a straw. […] It is a big tent, and the only thing for certain is the more certain someone gets about yoga, the wronger it goes.

I credit this quote with keeping my certainty and my ego in check as I see yoga mixed and matched with the cultural fascinations of the day.

I also want to be clear that I’m not opposed to pot or alcohol (or goats!) as an enjoyable way to spend an evening, but I don’t include them in my yoga practice, and here’s why:

I look to yoga for a kind of encouragement that I don’t get elsewhere. Unlike popular culture, which encourages me to escape the discomforts of my life with distractions of all kinds (food, booze, shopping, scrolling), yoga asks me to get curious about discomfort and to know it well.

With pot, it’s more like “Breathing in, ooh, popcorn. Breathing out, I can has popcorn?”

Michael Stone described his method of meditation as “brown rice practice”*. His instructions to students were to sit and follow the breath. This practice, he explained, is not fancy, but it puts you in touch with the work you need to do. This is in contrast with practices like transcendental meditation that strive to take you above and beyond your everyday experience.

My yoga practice is a brown rice practice.

I don’t want to add anything to it that’s going to disconnect me from the work I need to do – not fancy techniques, not pot, not booze. I don’t want to go above and beyond, I want to be right there in the messiness of my life.

I want a practice that grounds me right in the middle of things. I want to build resilience and steadfastness in the face of discomfort. I want tools that develop courage, and I don’t mean the liquid variety, which is temporary, I mean courage that I can count on when life goes sideways.

And, as Pema Chödrön says, “there’s no time to lose”.