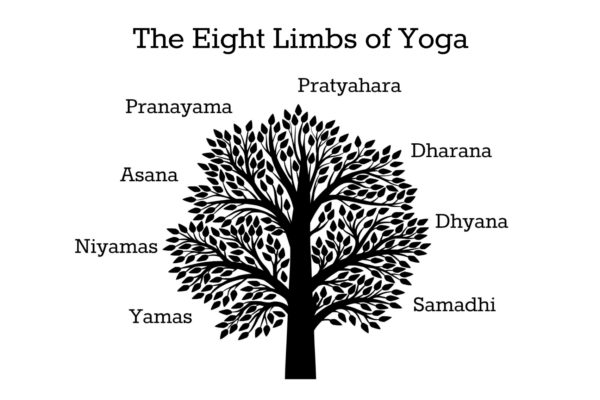 Many people in the west are first introduced to yoga by way of a yoga asana (posture) class in a yoga studio, gym, or community centre. If they continue on with their asana practice, they may learn a little about breathing techniques and meditation, but unless they seek out deeper studies in yoga, the emphasis will mostly be on the asana practice. However, if you think of yoga as a tree (and it’s often thought of that way), asana is just one limb on that tree. In fact, there are eight limbs on that tree. They are:

How many of these do you recognize? Are you surprised to see asana is third on the list? What comes before asana? The yamas and the niyamas do. There are five yamas and five niyamas, and you can imagine that each yama is one leaf on its branch, as is each niyama. 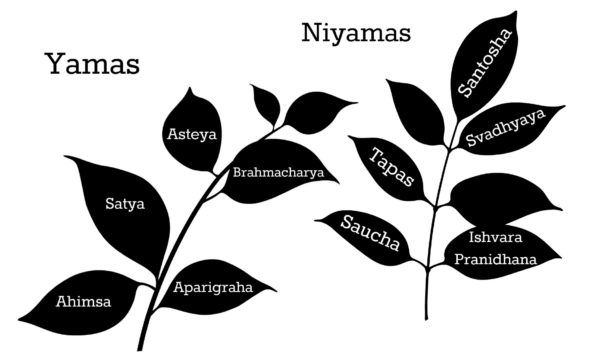 Some people talk about the yamas and niyamas as the “do’s and don’ts” of yoga, or compare them with the Ten Commandments. Personally, I don’t find that very helpful. I don’t like to think that if I get them right, I’m being good, and if I get them wrong, I’m being bad. I don’t want or need any new scales on which to measure my goodness. Instead, I like to think of them as ways to make my life simpler, or ways to free up energy for myself. Take satya (non-lying), for example. Have you noticed how much energy it takes to lie? Have you noticed how much energy goes toward creating the lie and trying not to get caught? You have to remember whom you’ve lied to, who knows the truth, and to keep the people who know the truth away from the people you’ve lied to. And you have to remember all the little details of your lie so you don’t get caught contradicting yourself. It’s exhausting! A practice of satya is going to free up all that energy. Telling the truth can also take energy, but in my experience, it’s still the better choice.

I’m for anything that promises to simplify my life, so I’ve always been interested in studying and practicing the yamas and niyamas. Over the next few months I’m going to dedicate a series of posts to these yogic principles, discussing how we can use them to navigate difficult times in our lives. Stay tuned! And make sure to leave your questions in the comments section below.